Andrews' current ms of poetry Beautiful Dust was a finalist for the 2014 Autumn House and she recently withdrew the work from Salmon Ltd, Ireland to protest unmoderated bashing of American writers by Irish writers on the press's social media pages.

Her most recent collection, Blackbirds Dance in the Empire of Love, lauded by Robert Bly and endorsed by poets Jim Moore, Dawn Potter and Patricia Kirkpatrick, appeared from Finishing Line Press 2013. A booklength collection Beautiful Dust was 2014 finalist for the Autumn House Press Poetry Prize and solicited by Salmon Press, Ireland. Turning on work set in the West and her native Southwest the collection is under submission to 2019 publication prizes.

Andrews is currently hard at work on two new memoirs: The Shame Garden: A Woman Writes of Isolation, Despair and Self-Redemption, which in intensely wrought and imagistic prose poetry chronicles the anatomy of shame; it is the poet's late-in-life tour d'force, sending the reader through Dante's circles of hell, the sewers of Paris ala Les Mis, mano a mano confrontations with the Alien mater familias, fusing literary and vintage cinematic works in an elliptical dance with human history and experience of being Other. The poet has no idea of what will become of this work but hopes it finds a home as memoir with a small press.

Other collections include the full-length Reunion, Lynx House Press, The Dark Animal of Liberty, Leaping Mountain Press, and In Pursuit of the Family, edited and published by Robert Bly and the Minnesota Writers Publishing House.

Her work has been anthologized in Heartland II, Northern Illinois University Press, 25 Minnesota Vols. I and II, Wingbone: An Anthology of Colorado Poetry, Women Poets of the Twin Cities, Oil and Water and Other Things that Don't Mix, and elsewhere.

IIt is Prof. Andrews' belief that one's collection of poetry must be judged on the quality of its craft, voice, and language, not its themes.

With Mr. Bly the memoirist Patricia Hampl wrote a forward to her first collection and is considered the "mother" of the modern American memoir although she arguably shares this title with Mary Karr for Karr's The Liar's Club. Andrews mentored Karr in Minneapolis when the former was circa 19.

Professor Andrews has had an illustrious teaching career at Colorado State University and the University of Colorado where she taught prelaw students in the making of argument and the issues-oriented seminar The American West. She was the highest rated instructor in the University Writing program during her tenure at Boulder.

Currently Professor Andrews writes daily at age 70, having been rendered housebound in 2007 in a fall from a horse, at home with her lover and companion of thirty years the fiction writer Jack Brooks, ten new poems a month, and is working on an additional memoir about her pioneer roots, "Territory Fever: The Story of an Albuquerque Family," posted as chapters are finished to Loquaciously Yours where the poet has produced over 450 essays in the past decade on a variety of topics as well as book reviews. Upcoming: a review of Ethna McKiernan's new Salmon Collection.

Ms. Andrews is also a Civil Rights Advocate advocating in 2019 for the civil rights of the poet Ping Wang who recently won the AWP Award for Memoir.

In 2015, after a long battle, Andrews extracted her MFA in Creative Writing/Poetry from Colorado State University, begun and finished in the 80's, self-advocating under the Americans with Disabilities Act. In fact Andrews was instrumental in the Colorado Commission on Higher Education's approval of the MFA at CSU.

She is a literary fellow of the National Endowment for the Arts, the Minnesota Arts Board Fellowship, was short-listed for a Bush Foundation Fellowship, and was full-time Poet in Residence for the St. Paul Schools from '74-78.

She lived in St. Paul from 1971-78 during the first wave of the Twin Cities literary renaissance, one of the first poets to inaugurate The Loft Literary Center, co-founding Women Poets of the Twin Cities which as noted boosted the careers of Mary Karr, Ethna McKiernan and others, and spent the summer of 1973 in Reggio Calabria, Italy which gave rise to the "voluptuous prose-poetry" memoir Nightfall in Verona posted in entirety here, designated by arts maven and former friend Caroline Marshall of NPR The Writer Reads as "fabulous."

Circa 2010 Andrews also founded a poetry group on She Writes which included Dawn Potter, Katha Pollock and other noteworthy writers, and supported the work of Meg Waite Clayton, fiction writer in addition to mentoring a number of other up and coming writers.

There is no way to estimate the influence on the lives and work of the some 12,000 students k-12 she met and encouraged in the seventies, but the poet James Tolan has attributed his career to her work as it was anthologized in Heartland II, Lucien Stryk, Editor. Professor Stryk read the title poem of In Pursuit of the Family on NPR.

Signed copies of the Blackbirds Dance collection, endorsed by James Moore, Patricia Kirkpatrick and Dawn Potter, are available from the poet. She posts new work below and is available for mentorship and virtual readings via Skype.

She is happy to critique ms. of poetry, fiction and memoir for a small fee.

It is true that I am the beggar heroine of my own life.  It is true that I have
wounds that glitter in the sun like silver dollars baked into my skin.  It is true
that I have a mouthful of black butterflies at sundown.  But pain is.  Lies are.
If you love and open the wound your heart is someone will pour black oil

Into it--  you will fold like a white silk scarf in the meaningless light of
afternoon.  You will want to die, but then if you can stand it a few
seconds longer, you will rise up, sit in the dusk where the clouds and
retreating sun make a bonfire scrim behind the trees. Have you seen

The way they reach and search, with the black branches against magenta
and orange light, the beggar heroine ascending from her despair like a
blackbird, in a few luminous minutes of delight.

I have wept and I have raged: is this not true of us, we who feel too keenly,
so that we are pierced by the merest whisper. I would like to have stones in
my breast, not flesh, not the pale weak flesh so readily seared by innuendos.

I would like not to rise up like a matriarch owl, my wings beating over you
who live by wounding and cowardice. For lo, I am utterly sick of being
a wound, sick to death of death and the smell of death and rain and the
promise of rain only to have the pallid sun beat down and parch the earth.

I would love to be a clock, inanimate yet ticking away the seasons.  Or a
bomb that did some good, if  there were such a bomb, like safely moving
a collapsed house off a child even if it cost me my life.  Or to be someone

On fire with self-belief, who has not collected all of her tears like sapphires
in a velvet box or hour on hour, blunders on even when the shadows
feel like loving pale arms and the water waits, in  a wanton and green allure. 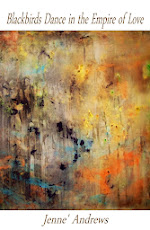 Order Blackbirds Dance in the Empire of Love from Finishing Line Press now!

"The gift of these poems is their charged musical language and the poet’s engagement with the physical world.." Patricia Kirkpatrick, 2013 Minnesota Book Award Winner for , Milkweed Editions.

Jenne' Andrews' booklength ms And Now, the Road, was a finalist for the 2014 Autumn House Poetry Prize!